At St. John's this year we took a crazy idea and turned it into ministry. In a special bonus edition of my monthly In Good Faith column, I share how the St. John's Not-So-Spooky Haunted House came to be. [Check out some pictures on the NSSHS Facebook page] 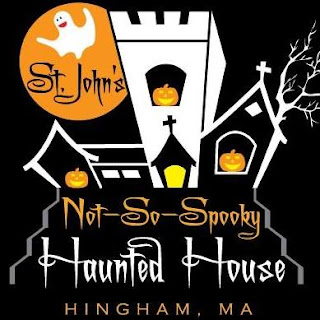 Last weekend we debuted our St. John’s Not-So-Spooky Haunted House. We had no idea what to expect, really. The whole thing started when a parishioner approached me about a “crazy idea.” Now, usually when this happens, I nod my head, say something like “Hmmm. Sounds…interesting,” and hope the person gets distracted and forgets about it.
But I was intrigued when Dan Fickes started laying out his vision for a family-friendly Halloween event at the parish. While he and his family are relatively new to Hingham, I’ve known Dan to be a creative and generous guy — he owns a video production company and recently put together a video highlighting our Sunday School program. He’s also, as I like to call him, something of a “Halloween savant.” He’s set up major displays in Boston and his excitement around the subject is contagious.
Soon enough, I was sucked into his All Hallows’ vortex and we had organized a small team 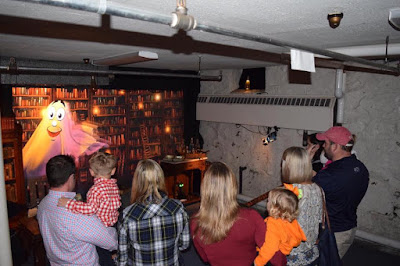 to plot and plan ways to pull off a large-scale community event. There were logistical issues with recruiting an army of volunteers, publicity, graphics, artwork, Halloween-themed crafts, and food. But Dan’s primary focus was the haunt itself. And he personally put in 50 hours to turn the church basement (a spooky place to begin with!) into an enchanting, interactive exhibit intended to delight and entertain young children.

What he created was pure magic. Visitors meet Freddy the Friendly Ghost, who greets everyone in his library and walks them through his little world, which includes a haunted dance party and a   haunted pet shop. There’s also a black light tunnel, an enchanted graveyard with a Haunted Mansion-like bust which sings a catchy Halloween song. The haunt ends with all the children getting a special pair of “Spooky Specs” which enables them to see all the fun in the Hallway of Holograms before going back up to the non-spirit world for donuts, apple cider, and crafts. 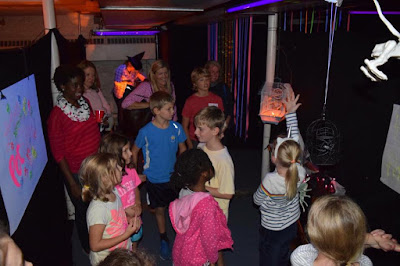 You could ask the question, “Why would a church host a haunted house? Isn’t that some sort of anti-Christian, pagan ritual?” And here’s where I got excited. Because there are actually deep religious roots embedded in the Halloween story. I mean, the whole reason Halloween even exists is that All Saints' Day is November 1st. Christians mock death by dressing up in costumes the night before we remember all those who have come before us in the faith. And this is at the heart of Christianity – that through his death on the cross Jesus has destroyed death. The essence of All Hallows’ Eve is that since death no longer has dominion over us, we can mock it. And, while this fact gets lost amid the Halloween displays at those temporary costume shops that pop up faster than Julian Edelman after a devastating tackle, we can also have a lot of fun in the process.
In the end, we had about 800 joyful children and adults come through on our opening weekend. And if you missed it, the St. John’s Not-So-Spooky Haunted House continues this weekend on Friday and Saturday, October 28 and 29 from 5:00 to 7:30 pm. The suggested donation — which goes to support the ministries of the church — is $5 per person or $20 per family.
I hope you’ll join us. We even promise not to scare the “bejesus” out of you!
Posted by Tim Schenck at 8:02 AM