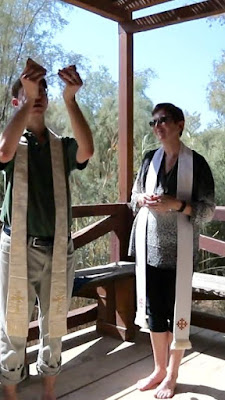 I thought it might be anticlimactic. I mean, after you've celebrated the Eucharist along the banks of the Jordan River near the site of Jesus's own baptism, coming home to do the same old thing on Sunday morning with the regular crowd had the potential to feel rather...pedestrian. Right?

Throw in an acute case of jet lag and the whole morning felt like a cruel slog. The sleepless 12-hour flight from Jordan to New York; the three-hour layover at JFK; the flight into Logan; the 45-minute cab ride home to Hingham that got me in at 12:30 am local time; and God-only-knows about my internal clock.

In football they refer to such situations as "trap games." After getting hyped up to play a top-ranked opponent, there's a natural letdown when you face a mediocre team the following week. So much energy and preparation has been put into defeating the valiant foe, that teams -- even outstanding ones -- often become vulnerable in their next game.

Hauling myself out of bed on Sunday morning had all the trappings of a "trap Eucharist." It was something I just, frankly, wanted to "get through" rather than celebrate. I was happy to go through the motions at St. John's but was in the mindset of 'let's just get this over with so I can go catch up on some sleep.'

But standing at the altar was exactly the moment the Holy Spirit arrived to put me in my place. Once
again. Because far from feeling anticlimactic, my experience at the Jordan with my fellow Episco-pilgrims only enhanced my experience at home. As the heavens opened up when Jesus was baptized with the Spirit descending like a dove, it did feel as if the heavens had opened up in the sanctuary in which I stood. 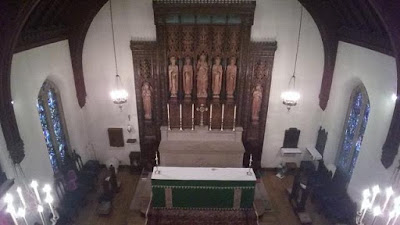 Suddenly, I was celebrating the Eucharist not just with a church full of fellow spiritual travelers in Hingham but with Christians everywhere across the world, with the fullness of the communion of saints in heaven, with Jesus himself as the chief celebrant.

I'm not sure what others experienced yesterday morning, but that's where my heart and mind and soul were. Transported from the place where Christianity began to the altar at which I serve with people who seek to follow Jesus in their own lives and in their own ways.

Through God's grace, the experience was the opposite of anticlimactic. It was transcendent. And I was, like C.S. Lewis, "surprised by joy."

As a priest, there are days when you're distracted or "not feeling it" while at the altar. But then there are moments of transformation and tangible communion with God. The good news is that it's not up to us -- you learn that pretty quickly as a newly ordained priest. The whole "making the transcendent happen?" That's above our pay grade. That's the Holy Spirit doing its thing.

I trust that someone in the congregation is having a transcendent experience even when I'm not -- that the heavens are breaking open for someone. And that's the gift and beauty of invoking God's spirit in the midst of the worshipping community. Resurrection moments happen often when we least expect them. And it was good to be reminded of this, once again, on Sunday morning.
Posted by Tim Schenck at 9:55 AM