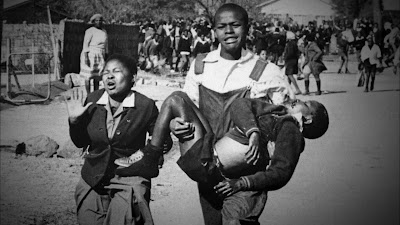 On December 28, just three days after Christmas, the Church marks a dark day in the liturgical calendar: The Feast of the Holy Innocents. On this day, we remember the Biblical account of King Herod's order to kill all the male children under the age of two in order to avoid a threat to his throne from the newborn Jesus, called the King of the Jews. Never mind that Jesus' kingdom was of a completely different realm, this story is a classic example of the harm fear and a thirst for power, combined with human weakness and insecurity can affect.

This episode in Matthew's gospel came to mind as our group of 27 St. John's parishioners toured Soweto township, the epicenter of the anti-Apartheid movement. In particular, we visited the site where Hector Pieterson, a 14-year-old student, was gunned down by the white South African police force. Peterson was one of the first students killed on June 16, 1976, in what became known as the Soweto Uprising.

Students in Soweto had gathered to march in non-violent protest against the Apartheid government's
insistence that Afrikaans be used to teach classes. This was, of course, anathema, as it was considered the language of oppression. What began as a simple protest, turned violent after police entered the township and the crowd became restless.

At some point, the police started firing on the crowd and at least 176 black South Africans were gunned down that day -- though others estimate it was hundreds more.

The iconic photo of Pieterson being carried by a fellow student and trailed after by his sister led, finally, to international attention being focused on the situation in South Africa. In a sense the Soweto Uprising was the beginning of the end for Apartheid, even if it took nearly 20 years to become overturned as official policy.

Although the events of June 16, 1976, took place over 40 years ago, the sense of being at the center of the struggle against oppression is powerful. We walked around the monument to the forward-looking Freedom Charter, placed on the very site it was signed in 1954. We also visited the Nelson Mandela house and passed by Bishop Tutu's residence -- two future Nobel Peace Prize winners lived within one block of one another!

But it was the site of the Hector Pieterson memorial that so strongly evoked the image of the Holy Innocents. As St. Augustine once wrote of these young martyrs, they were "buds, killed by the frost of persecution." Indeed, as we walked this site with some of our group being children of Pieterson's exact age, the injustice and tragedy of that day in 1976 came bubbling up to the surface.

Where is God in this? In the townships; standing with the oppressed and marginalized; with those seeking to stand up for peace and justice in the face of hostility. While Apartheid has ended, the struggle continues.