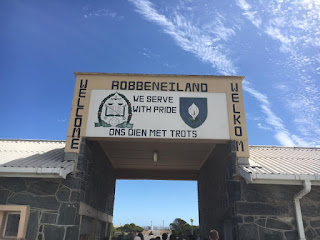 On the afternoon of our first full day in Capetown, we took a ferry out to Robben Island. If you're not familiar with the iconic South African prison, it's where Nelson Mandela was held as a political prisoner for 18 of the 27 years he was behind bars during the Apartheid era.

When you're traveling with a group of 27 adults and teenagers, silence is rare. And so the hush that came over our group as we docked and approached the front gate on foot, was noticeable. It did feel like we were walking on holy ground as we reverently entered the prison yard. The island itself, a place that should have been overrun with the natural beauty of a coastal South African shangri la, felt somehow desolate; every pebble and blade of grass crying out with the voice of struggle. 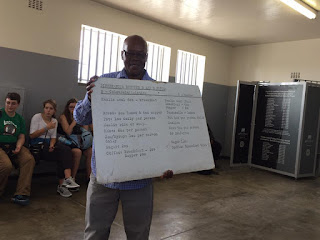 Our tour guide was himself a living martyr, a man who had been imprisoned on the island for five years, between 1977 and 1982. His crime? Working for justice amid a reign of terror as a member of the African National Congress (ANC). His life and his story served as a flesh and bones monument to grace, forgiveness, reconciliation, and hope -- rare commodities in any age and certainly our own current political climate. And we were privileged to be in his presence and hear first-hand the tactics Mandela and his fellow prisoners used to maintain their dignity, humanity, and wholeness when they were being beaten down -- literally and emotionally -- on a daily basis.

In the accompanying photo (taken by John Hussey), our guide was explaining how the white warders (prison guards) tried numerous ways to divide the prison population against one another. One method was to give different meals to different "classes" of prisoners. The Indian and "colored" prisoners received better and more food than the Black Africans. This tactic also included prison clothes -- blacks were not given shoes; others were not.

Rather than foster jealousy and division among the prisoners, these methods simply strengthened their resolve. Food and clothing was shared regardless of status, thus subverting the very division the Apartheid government sought to sow among the prison population.

The most moving experience for me was simply walking in Mandela's shoes as we crossed the ground upon which he himself trod. Yes, this was a pilgrimage as we saw relics of his stay including the quarry where the political prisoners were forced to break up rocks and the cell in which the famous freedom fighter was held. A saintly aura filled the place even in its desolation and desperation.

As we continued our tour of the prison grounds, our guide told us a story out at the quarry of a visit Mandela and other survivors made back to Robben Island a number of years after the end of Apartheid. Following a ceremony commemorating their time in prison and the subsequent outcome of their victorious struggle, Mandela spontaneously took a stone from the quarry and laid it down on his way out of the quarry. The other prisoners followed suit and soon there was a pile of rocks that remains to this day. These Stones of Remembrance stand as a reminder that, while we can forgive, we can never forget. 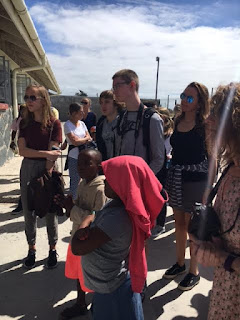 The prison on Robben Island lives on not as a symbol of destruction but as a beacon of hope amid a dark world. It would be easy to whitewash history and demolish the buildings. But we cannot. For people like us, who understand that out of darkness there is light and out of death there is resurrection, we need tangible reminders, like the cross itself, that hope abides.

As Mandela himself once put it, "The names of those incarcerated on Robben Island is a roll call of resistance fighters and democrats spanning over three centuries. If indeed this is a Cape of Good Hope, that hope owes much to the spirit of that legion of fighters and others of their caliber."
Posted by Tim Schenck at 12:38 AM