The Legend of Devil's Peak

After 31 hours of travel that including three flights, which was really nothing in comparison to the year-long preparation for the trip, the 27 teenagers and adults from St. John’s landed in Capetown, South Africa, late on Friday night.

I’m here as a priest, yes, but also as a dad as Ben is one of the high schoolers who committed to making this journey. Along the way, we had seminars on the history of South Africa, read a number of books including Nelson Mandela’s autobiography, A Long Walk to Freedom, and everyone was involved in fundraising to make this once-in-a lifetime cultural experience become a reality.

Even with all the hard work, we couldn’t have done this without the assistance and inspiration of two fairly new parishioners at St. John’s, Holly and Bill Carter. After the Carters retired, they moved to the area and started attending our parish. Holly, a retired dean at Northeastern who helped Oprah set up a girls school in South Africa, and Bill, a retired engineer and MIT-trained mathematician, have quickly had a profound impact on the parish. It’s not just that they’re one of the few African-American families at St. John’s, it’s that they are passionate about both their faith and sharing their experiences with others. We are all enriched by their presence and a bunch of us are now in South Africa, a journey Holly has taken many times before and wanted to share with the congregation.

Today was the first day here and it started by throwing open the windows of our hotel room and coming face-to-face with…Devil’s Peak. Rather ironic for a church group, perhaps, but I was fascinated to learn the story of the name. Later that morning we headed up to the aptly-named Tabletop Mountain where we got a closer look at this mountain with the curious name. 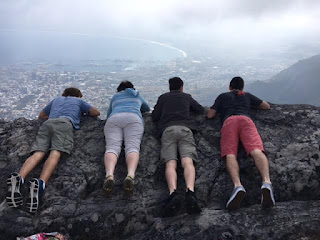 It turns out that there’s a wonderful legend involving the naming of this mountain. A prodigious Dutch pipe smoker named Jan van Hunks lived at the foot of the mountain in the early 1700s. His wife didn't allow him to smoke in their home so he would wander the trails leading up the slope, puffing away. One day he encountered a mystery man who also smoked. After both bragged about their heroic smoking capacities, the man challenged van Hunks to a contest. If van Hunks could smoke more, the man, who turned out to be the Devil, would leave the mountain to him. If the devil won, he would take the other man’s soul.

Well, van Hunks bested the devil but not before the smoke they created covered the mountain, forming the famous “table cloth cloud.” And indeed, it is usually covered with a gentle wisp of clouds near the peak.

The great saintly legends have nothing on this smoky story! The truth, however, may be

more along the lines of what’s found on the website for Capetown’s Devil’s Peak Brewery.


Forty years before Vasco de Gama rounded the Cape in 1497, the Venetian cartographer Fra Mauro created a map of the world for King Alfonso V of Portugal, based on knowledge drawn from the Arabians. On this map, which became the definitive view of the world for the early Portuguese explorers, he named the southernmost tip of Africa, Cabo di Diab — the Devil’s Cape. It’s very likely the association with the Devil simply migrated from the Cape to the mountain that flanks ii. After all, sailors are a superstitious lot and Devil’s Peak remains the path through with the Cape Southeaster howls, churning up the waves in the Cape of Storms.

This reminds me, I need to track down an ale from Devil’s Peak Brewery while I’m here.

The spiritual highlight of the day was a trip to Robben Island, the place Nelson Mandela was imprisoned for many years during the dark days of Apartheid. More about that later -- much to process on many fronts.