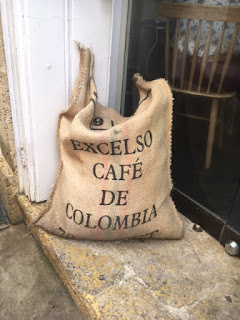 There are many reasons to visit the South American country of Colombia: the culture, the architecture, the history, the music, the food, the cocaine (just kidding). We recently returned from a family vacation to Cartagena, an ancient city on the northern coast, and while it was a magical experience in many ways, the primary draw for me was the coffee.

Some of the world's best coffee comes from Colombia and the industry itself is ingrained in the national heritage. Colombians take tremendous pride in their global reputation for high-quality coffee beans which comes from 2.2 million acres of coffee cultivation across the highlands. What makes Colombian coffee so special? Predominantly the combination of high altitude, rich volcanic soil, and shade-grown cultivation.

One of the sad things you quickly realize in many coffee-producing nations — and Colombia is no exception — is the lack of…good coffee. It seems counterintuitive that a country that harvests some of the finest coffee on the planet would serve crappy coffee to the natives but this is often the case. The good stuff gets exported at top dollar while the mediocre to middling stuff remains in country. 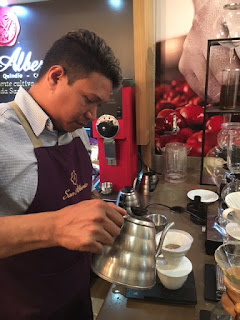 This is mostly an economic reality but it’s sad to travel to a coffee-producing Mecca and be served something you’d find at a Holiday Inn Express in Bayonne, New Jersey. Fortunately this culture is changing — or at least native specialty coffee shops that emphasize local coffee and education are becoming much more common.

In Cartagena, you can find some pretty lousy stuff that passes for coffee. It’s sold on street corners and in restaurants and cafés all over town. But the good stuff is also available if you seek it out. Which is precisely what I did thanks to the internet and coffee pilgrims who have come before me.


One of my favorite finds was the Café San Alberto, located on a side street near the Cartagena Cathedral called Calle Santos de Piedro. The coffee comes from the San Alberto farm in Buenavista in the Quindío region of Colombia, located in the central Western part of the country among the Andes Mountains. 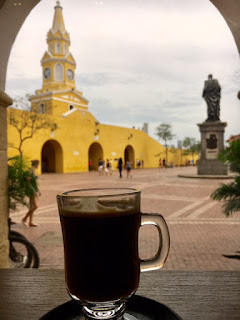 The café was simple but well-apportioned and the barista who served me was passionate about the coffee and genuinely excited to answer my questions about the farm and the family that has owned and operated it for generations. Plus his name was Omar which, if you know your coffee history, is a fantastic name for anyone in the coffee business -- there's an apocryphal story about a Yemenese Sufi mystic healer who popularized coffee drinking in the 10th century known as Omar the Dervish.

Another coffee shop I discovered was a newly-opened café called Epoca Espresso Bar. Okay, maybe that’s not the most Spanish-sounding name and they may be catering to Western tourists but…wow. 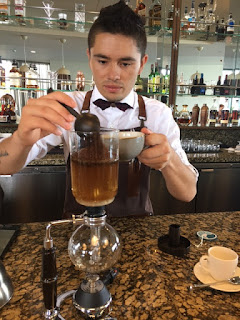 I tasted several coffees but the one that stood out was the San Donatto from Colombia’s Nariño region. And anyway, who doesn’t like drinking fine coffee named for a saint? Especially a 4th century Italian saint who challenged and defeated a dragon who had poisoned the local drinking well by…spitting on the dragon.

Every day I treated myself to yet another Colombian coffee experience -- sometimes alone, sometimes with Bryna or my brother Matt who was with us. I even drank coffee prepared out of a syphon for the first time (the cleanest cup of coffee you'll ever have, plus the apparatus looks like something out of Breaking Bad).

It really was a fantastic journey and I'd highly recommend a trip to Cartagena's old walled city. Very few American tourists, great coffee, and an all-around life-changing experience.