In Good Faith: Leaving the Nest

In my September In Good Faith column (which I forgot to post until now!) I wrote about the emotions surrounding dropping your first child off at college.

Sending your eldest child off to college unearths a swirl of emotions. Like pull-out-a- 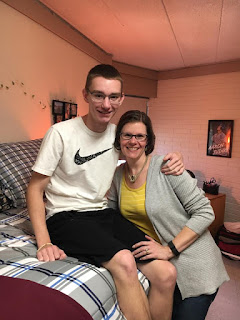 thesaurus-because-you’re-running-out-of-names-for-them-all emotions. It’s not as if we didn’t see this coming; in a sense you prepare for this day from the moment they’re born. But it’s still a shock to the system that is the family dynamic.

We dropped Ben off at college last week and it was a strange combination of elation, pride, anxiety, melancholy, excitement, and the feeling that we’d just lost a limb. He’s ready, we’re ready, and yet this changes everything. And nothing. He will grow and evolve and become more of the person he was created to be and through it all, we will continue to love him and support him in ways visible and invisible.

Still, I’m not exactly sure what to expect in all this which is why I suddenly look to empty nesters and partial empty nesters (is there even a word for this in-between stage?) as my own personal gurus. I approach them with a certain reverence as I humbly seek counsel on what it’s like “on the other side.”

Most tell me it’s hard; very hard. But that it gets easier over time and by October we should be fine. This sounds like much the way humans react to change generally, with an initial period of bewilderment and emotional chaos followed by acceptance and recaptured joy.

I do know there will be a big void at home. I’ll miss Ben’s wry sense of humor and his ability to reach things out of the tallest shelves in the kitchen cabinets. I’ll miss shooting hoops in the driveway and cheering on our Ravens together on Sunday afternoons — sorry Patriots fans.

I’m pretty sure I’ll even pine for the things that used to drive me crazy — like using eight water glasses per day when one would suffice and seeing them strewn all over the house; grabbing a fresh towel for every shower like he was living at the Ritz-Carleton; banging around the kitchen foraging for food at midnight on a Saturday night when I have to be up early to lead Sunday morning services.

I’d like to think we’re going into this new reality with our eyes at least partially open. My wife and I got the message loud and clear at orientation that helicoptering parents were not welcome. Although the school is only an hour away, it’s not as if I was planning to show up for an early Saturday morning breakfast with Ben every weekend. Or that I’d start arguing with his professors to up his grade half a point in Intro to Psych. It’s his life now and while that reality is a tad disconcerting, the growth potential is limitless. Which makes the whole experience, fraught with anxiety though it may be, worth it.

Anyway, at least we weren’t like the parent at orientation who asked the academic dean whether students were allowed to leave campus without permission. Um, we’re not sending them off to prison, for God’s sake. And, ready or not, they are all adults.

In the meantime, I’ll continue to resist the urge to text him every day. See you at Thanksgiving, Ben!