In Good Faith: Day after Day

In the November edition of my In Good Faith column I write about the post-holiday blahs, the tradition of keeping vigil, and the potential for stale Halloween candy.

Be honest. Do you have any leftover Halloween candy or have you eaten it all by now? Your 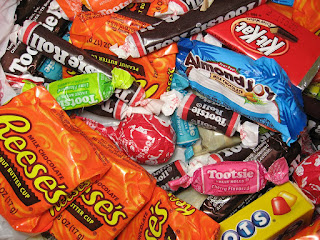 answer likely depends on whether or not you have children in the Halloween-obsessed zone and just how stealthy you are about “reapportioning” some of the bounty.

But even for those of us who don’t get many trick-or-treaters (no sidewalk, live next door to a church) or who have children past the dress-up age, you still must be prepared. Which involves buying a few bags of your favorite candy — just in case. “Oh, rats, there’s just so much leftover candy. Well, I wouldn’t want it to go to waste…”

We don’t often think about the day after holidays. We’re big on eves, of course. Christmas Eve, New Year’s Eve, All Hallow’s Eve (aka Halloween — the night before All Saints’ Day). The word itself derives from “evening” and thus the evening before a big holiday is full of anticipation.

In the Christian tradition, the concept of keeping vigil the night before a major holy day runs deep. It is a time to wait, watch, prepare, and pray for the celebration that is to come. In the early church, the all-night liturgy that preceded day break on Easter morning was the most sacred ritual of the year and the Easter Vigil remains the most ancient of Christian liturgical rites. If you expand the idea, you could argue that the entire seasons of Advent and Lent are like extended “eves” before Christmas and Easter.

Yet for as much emphasis as we have traditionally put on vigils and eves, we don’t think much about the day after a big holiday.

Well, that’s not entirely true. There is Boxing Day, which is celebrated in England, Canada, and other parts of the former British empire, on the day after Christmas.

In the Middle Ages, it was the day when a church’s alms box was opened so the contents could be distributed to the poor. It was also traditional that servants got the day off to celebrate Christmas with their families — since they all had to work on the actual holiday itself.

In modern America, since we don’t tend to have servants, “boxing day” might refer to either cleaning up all the boxes from the absurd over-abundance of Christmas gifts or the fights we get into with our dysfunctional families over the holidays.

Boxing Day aside, little thought is given to the day after holidays. I know on December 26th I generally feel like I’ve been hit over the head by a giant candy cane. But that’s more a function of having led a slew of church services in the preceding 24 hours.

I do wish we collectively put at least a modicum of emphasis on the day after a major holiday. It’s probably enough to take a few minutes to pause and reflect upon the greater meaning of the day; to sit in the warm glow of shared memories for a moment; to contemplate the unique traditions inherent in our most beloved celebrations.

But all of this can wait. In the meantime, I have some candy corn to attend to. I wouldn’t want them to get stale.

I have tried for years to get folks to spread out the activities, but with little result.

Why must we have all those pre-holiday "Christmas" parties but nothing afterwards? What about an Epiphany party? Ha.

And although the Easter season is fifty days long, including Ascension Day--a great time for an outdoor picnic--Nobody wants to touch it. They'd rather party for Mardi Gras.