In Good Faith: The Soundtracks of Our Lives

In this month's edition of my In Good Faith column, I write about the dramatic moments of our lives -- and the accompanying soundtracks.

The Soundtracks of Our Lives

Whenever I watch a show on Netflix or see a movie, I’m always struck by how dramatic the 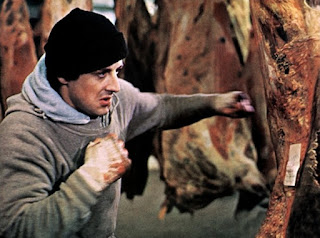 scenes are — the courtroom encounters, the romantic professions of love, the stirring chase scenes. And then I contrast this with my own life, and the interactions I have on a daily basis feel somehow…lacking.

It finally struck me one day, that it’s less about the drama in my life. I mean, sure, I don’t engage in many high speed chases with guns blazing, like some sort of clerical version of James Bond. And my wife wouldn’t take kindly to my living as though I was starring in a romantic comedy. Nor would my bishop.

But I realized the thing that’s really missing is the accompanying soundtrack. What makes so many of these moments tug at the heartstrings or get the heart pumping, is the music that matches the movement.

That training scene in Rocky set to “Gonna Fly Now” just wouldn’t fly if  Sylvester Stallone was doing one-armed pushups and punching raw meat if it was set to, say, “The Sound of Silence” or simply silence. Or Darth Vader entering a scene from Star Wars without composer John Williams’ iconic accompanying Imperial March theme, wouldn’t create that same sense of impending doom, than if he just appeared from stage left. Music sets the mood and heightens the drama and intensifies the emotions that go with the script.

Sure, there’s a bit of emotional manipulation, as when the crescendo builds to the climactic fight scene in a Bruce Lee movie or the classic combination of strings, tuba, and trombone that were used to create the Jaws soundtrack.

We don’t have this in our own lives, at least not to the same degree. No one plays “Eye of the Tiger” when I stumble into Planet Fitness before work; there’s no on-call string section to play soothing background music when I visit a dying parishioner in the hospital; there’s no trumpet fanfare when I do the dishes without being asked.

But none of this means our lives are any less dramatic than what we witness on our screens. Less purely entertaining, perhaps; not neatly wrapped up in one hour chunks, maybe. Yet our lives do play out in high definition, albeit without the accompanying real-time soundtrack.

Which begs the question, what would your life’s soundtrack be? If you’re like me, it would likely change depending on your mood and situation, spanning the range of human emotions. There are times when we need encouragement and comfort, inspiration and hope, empowerment and strength.

I’m a big fan of the blues, precisely because they encompass a wide range of emotion — joy, grief, anger, hope, faith, love, betrayal, sadness, and possibility. In the next moment I may listen to the Magnificat by 16th century Italian church musician Giovanni Palestrina, a master of Renaissance polyphony. And then I may crank some AC/DC.

In other words, the soundtrack of my life, like life itself, is complicated. And I would imagine, yours is as well. Dramatic, full of contradictions, boring at times, over-scheduled at others, messy, and confusing. But all blessed by God — all of it. Even when the soundtrack doesn’t perfectly align with the script.