In my September In Good Faith column, I write about the secret language all families share and the mixed blessing this can be for faith communities. 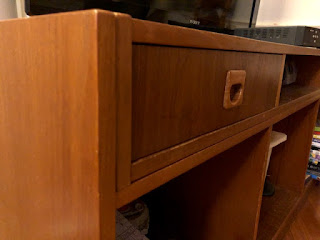 “The Danish thing.” If you asked anyone in my family what this refers to, you’d get a confused look. Because everyone knows that “the Danish thing” is the sleek wooden piece of furniture upon which the TV sits in our family room.

“The Danish thing” has been in my family for years. My parents bought it at Scan, a long out-of-business Scandinavian furniture and home goods store in Baltimore, sometime in the 1970s. Originally it held my father’s stereo equipment, prominently featuring his beloved turntable. I inherited it from my mother, a few years after he died, when my wife and I were moving into our first apartment. It’s been part of our furniture menagerie ever since, joining us for four interstate moves and the introduction of various children and pets along the way.

I casually referred to it recently in the hearing of a visiting friend, who gave me a quizzical look. No, “the Danish thing” wasn’t a piece of political commentary referring to President Trump’s recent quixotic attempt to purchase Greenland from Denmark.

But as I found myself explaining what was meant by my seemingly random invocation of a Scandinavian country, it occurred to me that every family has its own insider language. Almost every household, for instance, can identify and point out their “junk drawer,” that catch-all home to assorted keys, coins, tape, rubber bands, Pokemon cards, half-eaten packages of Skittles, screwdrivers, and phone chargers.

But this is just the tip of the family-specific lexicon iceberg. These include using pet nicknames for one another, calling the family sedan “the old gray mare,” having unusual names for specific rooms in the house, or referring to that big mixing bowl used for making chocolate chip cookie batter as “that red one.” The words and phrases used by families help form communal identity, creating a tribe-specific vocabulary. As you think about the words of your own family of origin or your current situation, you’ll likely encounter a mix of practical descriptors and inside jokes.

In the church, we also have insider language and it’s, frankly, a mixed blessing. At one level, calling a cup a “chalice” and a plate a “paten” and the entryway the “narthex,” adds mystery and heightens the sense that to enter a church is to journey into sacred space. The word “holy” means “set apart” and this otherworldly language does just that — it sets apart that which we view as God’s realm.

But this language can also exclude, and that’s the danger. When the church acts like a club rather than a place of open invitation to all, the message of divine mercy, compassion, and hope is subverted. I love the magical, sacred words of ecclesiastical language, but they must be defined and not used as a way to create insiders and outsiders. There’s enough division in this world and we certainly don’t need to add to it.

This time of year many people return to church or take those first tentative steps through the front door of a new worshiping community. It’s incumbent upon me and my colleagues in ministry to be as hospitable as possible. Hopefully you won’t need Google Translator to make it through your first service at a new church. I don’t think we intentionally mean to trip people up, but sometimes we forget that not everyone speaks the same language.

By the way, “the Danish thing” is looking a bit tired and wobbly these days, and perhaps it’s time to send it off to the great furniture store in the sky. But whatever its fate, hearing that phrase will always makes me smile.