In Good Faith: Practice What You Preach

In my October In Good Faith column I write about the spiritual dangers of hypocrisy and why yelling at your children to stop yelling might not be such a great idea.

Practice What You Preach

“Stop yelling!” When a parent yells at a child to stop yelling, it’s the ultimate do-as-I-say-not- 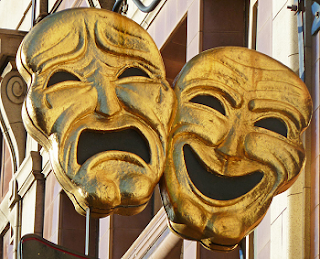 as-I-do moment. And, believe me, every parent’s been there. You’re in the car, trying to listen to the voice on your GPS leading you to an out-of-the-way apple orchard for some quality family time; you’re sitting in heavy traffic because there’s an accident up ahead; the kids are whining from the back seat because they are simultaneously “starving” and have to go to the bathroom, even though you just stopped five minutes ago. And, to top it off, they’re loudly arguing and yelling at each other about who’s on whose side.

“Stop yelling!” Usually the second those words, hurled in utter frustration, leave you lips, you’re aware of just how ridiculous you sound. Yelling at someone to stop yelling is like telling someone to give up smoking, while chain smoking unfiltered Camels. It’s just a bit…hypocritical.

You may know that the word “hypocrite” comes from the world of the theater. In ancient Greece, “hypocrite” was the term used to describe an actor. It literally meant “one who wears a mask.” Over time, it came to refer to someone wearing a figurative mask. In other words, a person pretending to be someone they’re not.

In Scripture, there are really two types of hypocrisy that arise again and again. The first is holding a particular belief and then acting contrary to that belief. The prophet Isaiah condemned the hypocrisy of his day this way: “The Lord says, ‘These people come near to me with their mouth and honor me with their lips, but their hearts are far from me.’”

The other type of hypocrisy happens when we judge others or look down on them for certain flaws, when we ourselves are hardly perfect. Of course it’s easy to stand in judgment of others without examining our own lives — and it’s kind of fun! Putting others down makes us feel so much better about ourselves. Jesus said a few things about this behavior — “Let him who is without sin cast the first stone” and “First take the log out of your own eye, and then you will see clearly to take the speck out of your neighbor’s eye.”

Public examples of hypocrisy, unfortunately, abound. The family values politician who gets caught up in a prostitution sting. The pastor who preaches dignity for all but preys on children. The celebrity who constantly posts on Twitter about the impact of climate change but takes private jets everywhere. The list goes on and on.

But it would be, well, hypocritical, to point out the hypocrisy in the world and in others without acknowledging our own hypocrisy. And make no mistake, we are all hypocrites in certain aspects of our lives. Whether it’s yelling at your children to stop yelling or claiming to be tolerant of others’ opinions, unless they disagree with you, or encouraging others to donate to causes but not actually donating yourself.

Jesus spent so much time railing against hypocrisy because he knew that a hypocritical life leads to an unfulfilling and unhappy life. If you are living a life of contradiction, one where your actions are opposed to your values, you can’t help but be bound by internal strife and deep shame. And that’s not what God wants for any of us. God understands that we are imperfect, complicated, multi-dimensional beings. Which is why we are simply invited to shed as much hypocrisy as humanly possible, both for the sake of our own souls and for those impacted by our actions.

So, take stock of your life and look at the places where hypocrisy may be getting getting the best of you. And remember, practicing what you preach isn’t just for literal preachers.
Posted by Tim Schenck at 3:17 PM