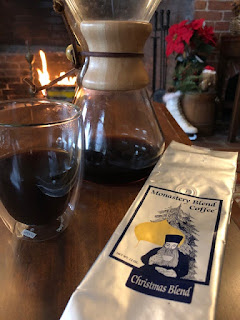 today I travel to a tiny monastery on the Puget Sound, site of the greatest David vs. Goliath coffee story of all time.

I'll get to that in a moment, but first a word about the All-Merciful Saviour Orthodox Monastery and its holy roaster, Father Tryphon. This Russian Orthodox monastery was established in 1986 and sits on Vashon Island off the coast of Seattle. While it is a contemplative order, they do welcome visitors and have guest accommodations for those seeking to make a pilgrimage. And when I say it's small, I'm not kidding. There are five monks.

According to the bag of coffee (a sample of which was generously shared with me by a parishioner named Cathy Torrey), Father Tryphon discovered the joys of finely roasted coffee while attending graduate school in Berkeley. After joining the monastery and learning to roast coffee himself, he decided to market Monastery Blend Coffee as a fundraiser for the order.

But on to the controversy! (which I write about in Holy Grounds)

We've all heard about the ridiculous Starbucks red cup debacle and the fake "war on Christmas" that conservative pundits love to trot out as evidence of the fall of the Western World. But this wasn't the first Christmas coffee controversy involving Starbucks.

In 1997 attorneys for Starbucks contacted the abbot of All-Merciful Saviour with a cease and desist order. The problem? Father Tryphon's Christmas Blend Coffee.

No, this had nothing to do with the fact that it really should be called Advent Blend Coffee, if you're drinking it before December 25th. You see, Starbucks also had a Christmas Blend Coffee and had recently trademarked the term.

Once the David and Goliath story hit the national news, Starbucks backed off, rightly seeing a publicity nightmare in the offing. Thus, you can still purchase Father Tryphon's Christmas Blend from October through December.

As for the coffee itself? If you like darkly roasted coffee, typical of the West Coast roasting style, you'll love it. I'm more of a medium to light roast guy because I love the subtlety of specialty coffee. But even I enjoyed drinking a cup of monastery dark roast since it, in some small way, allowed me to stick it to The Man.
Posted by Tim Schenck at 9:37 AM