In Good Faith: Getting the GOAT's Goat

In my December In Good Faith column, I try to jam as many football references and analogies into a single article, while focusing on this season of gratitude.

Getting the GOAT’s Goat

Tom Brady is cranky. The Patriots’ quarterback — he of the six Super Bowl rings, universally 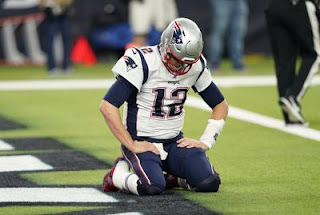 acclaimed GOAT (Greatest of All Time), and future first ballot Hall of Famer — is not happy. In this, his 20th season in the NFL, his team is sitting atop its division and the Patriots hold the best record in the conference.

So, what’s gotten the GOAT’s goat? Mostly it’s the way his team is winning and the lack of a supporting cast he deems worthy of the greatest sports dynasty to ever take the field in the modern era. The Patriots continue to rack up wins, but it hasn’t always been in Brady’s accustomed highlight reel fashion.

This crabbiness was particularly apparent following the team’s 17-10 win over the mediocre Philadelphia Eagles on November 17. At the post-game press conference, he came across like a petulant child who had been dragged into the principal’s office, rather than the winningest quarterback in NFL history.

In fairness, this quarterback crankiness may be what has kept Brady at the top of his game for so long. His drive for perfection in the pursuit of winning is the fuel that fires championships. Dropped balls, sloppy routes, and a lack of preparation will render receivers dead to QB12 — a state from which there is no resurrection. And Brady is clearly frustrated when neither he nor his teammates execute the game plan at the highest possible level.

Of course, we all get a bit cranky when we hit our early 40s and things don’t come quite as easily, physically speaking, as they once did. For Brady, this may mean throwing fewer than four touchdown passes on any given Sunday. For mere mortals like you and me, it may mean pulling a back muscle while bending down to get the colander out of the bottom shelf of the kitchen cabinet. That’s enough to make anyone a bit ornery.

The bigger picture during this season of giving thanks, is finding joy in and offering gratitude for the blessings of your life. An attitude of gratitude may not win you a shiny Vince Lombardi Super Bowl trophy, but it sure is a healthier way to live. Focusing on the fact that you’re 10-1 rather than that you may have fumbled once or twice along the way, leads to joyful living. As perspective is an important piece of the equation, you need to get your head out of the huddle from time to time and take in the broader view. There are some stunning vistas out there, if only we take the occasional time out to enjoy them.

So, while Tom Brady doesn’t need any career or life advice from me (full disclosure: this Baltimore boy is a Ravens fan), I do hope he’ll enjoy this season. Not the football season, necessarily, but this entire holiday season from Thanksgiving to Christmas. Because ultimately it offers us an invitation. Not to a fancy dinner party or even an informal gathering around the television to watch football. But an invitation to pause and give thanks; to take a moment to reflect upon the stunning goodness of God’s love and mercy; and to acknowledge our many and varied blessings.

We may still occasionally rue the mistakes made by the rookie receivers in our lives. But we can still give thanks for their effort and the strides they have made on the learning curve. Even as we recognize that we can all stand to grow in gratitude.
Posted by Tim Schenck at 10:48 AM