In my monthly In Good Faith column, I write about meeting a legend and the ensuing awkwardness. Yet being star struck, from a theological perspective, is a good and holy posture.


Have you ever been star struck? I remember one year when I was a kid, my father took meto Carnegie Hall for a concert featuring a narration by the Pittsburgh Pirates Hall of Fame first baseman Willie Stargell. Being in the music business himself, he knew the conductor and I went that evening with the promise, or at least the hope, that I’d be able to go backstage afterwards to meet this baseball legend.

I lived for baseball back then. I knew all the stats and all the players’ uniform numbers. 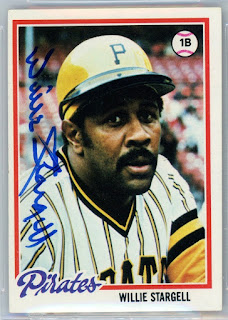 Being from Baltimore, I certainly wasn’t a Pirates fan, a team that had beaten the Orioles in the World Series twice in the 1970s.

But still, I was so excited to meet a true superstar, and I even brought one of Willie Stargell’s baseball cards, hoping that he might sign it. My brother still laughs at the sight of me standing before this giant of a man, staring up with eyes wide open, haltingly asking “Mr. Stargell” to please sign an autograph, and then watching me drop the card, not once but twice. He graciously signed it for me, but from a dignity standpoint, this was not my finest hour.

The reality is, I was star struck. Meeting a literally larger-than-life sports hero got me all twisted up. It was exciting and thrilling and nerve-racking and reduced me to a tongue-tied little kid. Which, in fairness, I was.

For Christians who follow the liturgical calendar — which orders the holy days and seasons of the church year — we’re in the Season after Epiphany. And at one level, this whole season is about being star struck. On the Feast of the Epiphany (January 6), the Magi are quite literally star struck as they follow Star of Bethlehem. Their journey is driven by a deep yearning to be in the presence of God, which comes to fulfillment upon their arrival at the manger.

In this sense, being star struck is something to be embraced and encouraged. Rather than embarrassment and shame, it brings hope and solace, meaning and wholeness. Sometimes we meet God awkwardly or with hesitation. But God doesn’t care about how we present ourselves, just that we do. So allow yourself to be star struck, and know that what really matters is that you’re simply responding to a deep yearning in your soul.

The piece Willie Stargell narrated that day was a newly commissioned work by an African-American composer named Joseph Schwanter titled “New Morning for the World.” It blended orchestral music with the words of Dr. Martin Luther King. Combined with Stargell’s voice and presence, it was a powerful piece that was unveiled to much acclaim. Embedded within it, with the strings slowly droning, were these words from his “I Have a Dream” speech:

The possibilities are limitless when we allow ourselves to be star struck by the divine.
Posted by Tim Schenck at 3:29 PM