In my January In Good Faith column, I admit to failing pretty much every New Year's tradition. I think I'll be okay.

I didn’t make it to midnight on New Year’s Eve. Well, I guess technically I did since I didn’t 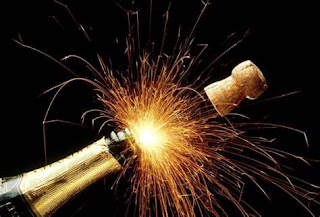 actually fall asleep until after midnight. But I was in bed with the lights out when the clock (that I didn’t hear) struck the New Year.

Over the years, I’ve come to recognize that the arrival of the New Year isn’t dependent upon my staying awake to ring it in. Whether or not I’m awake at the stroke of midnight, the New Year still arrives. And that’s rather freeing! Despite the more-than-you’d-think e-mails mistakenly addressed to me as “Father Time,” I bear no responsibility for the transition from one year to the next.

I didn’t make any New Year’s resolutions this year. This isn’t unusual for me, as I can’t remember the last time I did. I can get all philosophical (“time is a false construct”) or delude myself into thinking that, to channel Mr. Rogers, I’m fine just the way I am. While my wife and brother have made a pact to give up sugar, I just couldn’t come up with anything. Despite all the “New Year! New You!” ads for gyms and hair care products, I’m pretty sure God still loves the old me.

This week a friend forwarded me an article about a Lutheran pastor from Canada with the headline “Meet the Strongest Priest in the World.” Apparently the Rev. Kevin Fast, who bears a strong resemblance to a jacked up Santa Claus, pulled three firetrucks weighing 109 tons across a 100 foot parking lot in just 34 seconds. He’s also on record (with video evidence!) as having pulled 15 cars at once.

All of which is to say, I could resolve to double my efforts at the gym. Pastor Fast — maybe I could, ironically enough, outrun him? — makes my exploits on the StairMaster at Planet Fitness seem rather pedestrian.

I didn’t eat black-eyed peas on New Year’s Day. This brings good luck, apparently. Black-eyed peas weren’t part of my tradition growing up — or maybe my parents just decided to take their chances. But either way, seeing all those Facebook posts of people preparing black-eyed peas for their New Year’s Day celebrations makes me wonder what I’m missing and how luckier I’d be if I’d partaken.

There’s evidence that the tradition goes back to Rosh Hashanah and the celebration of the Jewish New Year, but these days it’s mostly a Southern thing. In the Civil War era, black-eyed peas were grown as food for livestock and became a staple of slaves. When General Sherman undertook his infamous March to the Sea, he destroyed all the crops deemed useful to the Confederate Army. He ignored the black-eyed peas, figuring they weren’t fit for human consumption. Those left in the South gratefully subsisted on the peas and ever since they have been viewed as a symbol of luck and prosperity, particularly fit for a celebration of the New Year.

So while 2020 begins for me with many unrealized traditions, I am nonetheless optimistic. Hindsight may indeed be 2020, but I pray that we will have the foresight to live into the future with peace, hope, and love. In the end, that’s really all that matters.
Posted by Tim Schenck at 5:27 PM