In Good Faith: Shielding the Joyous

In my latest In Good Faith column, I write about my fear of needles, vaccine selfies, and joy amidst grief.

Needles make me squeamish. It’s always been that way, even though my kindly pediatrician was 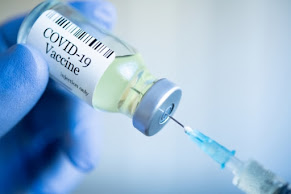 a family friend. I dreaded going to his office as a kid, like a medieval prisoner headed to the rack.  I still have to look away whenever a nurse administers a shot during some hospital scene on a TV show, and ask my wife to tell me when it’s safe to resume watching. There was never a question of whether or not I’d be a pre-med major in college.

So let’s just say the news has been hard to watch of late. As the vaccine distribution program has thankfully ramped up, there sure have been lots of close-ups of needles going into arms. It feels like camera operators take particular glee in the precise moment the needle breaks skin.

And this doesn’t even begin to cover the vaccination selfies on Facebook. They are ubiquitous these days. In fact, I’m not sure if the vaccine is even fully effective if it’s not accompanied with a social media posting.

This isn’t to disparage those who share these photos. Especially at the beginning, when first responders or elderly parents were getting vaccinated in the first wave, this was cause of great jubilation and hope. And as we move toward herd immunity, seeing needles all over Instagram is a small price to pay.

Yet I’m aware that these photos are hard to see for some — and not just for the squeamish among us. For those eagerly waiting for their vaccine turn, and the return of some form of normalcy, there’s a hint of jealousy at play. Yes, we’ll all get there. But for the isolated and lonely, the extroverted and the restless, patience is often elusive.

It’s been a long, hard, trying year for everyone. We ache for human contact and connection, for the routines and rituals of regular social interaction. Seeing some get there sooner than others, as happy as we may be for them and as important as we know it is, leaves a portion of the population feeling left out. It’s temporary, of course, but it doesn’t minimize the feeling of being left behind.

There’s a curious line in a favorite prayer of mine that invites the Lord to “shield the joyous.” I think it speaks to the fleeting nature of joy in a world that has its fair share of pain. We seek to amplify the joy of receiving the vaccine, even as this joy is surrounded by the profound grief of living through a deadly global pandemic. We mourn for the over half a million people who have died from COVID-19 in this country alone. We empathize with those who continue to suffer from the virus’ long-term effects. We wait with those who have yet to receive the vaccine.

Whenever we end up getting vaccinated and returning to a modicum of pre-pandemic life, I pray that our joy will be shielded. That we will revel in once again being among those we most cherish, even as we recognize that not everyone is quite there yet, and some will never be.