In Good Faith: Liberty and Justice for ALL

In my latest In Good Faith column, I write about the Derek Chauvin verdict, the discovery of Harriet Tubman's childhood home, and the ongoing work of racial justice.

Liberty and Justice for ALL

On the very day the much-anticipated verdict in the Derek Chauvin trial was handed down, I was struck by another headline that crossed my newsfeed. Given the events of the day, it didn’t garner a whole lot of attention. But the home where Harriet Tubman likely grew up was discovered by archaeologists on the Eastern Shore of Maryland. After years of searching, they found the remains of the place where Harriet lived as an enslaved child with her parents.

This homestead, surrounded by woods, was the place where the woman known as the 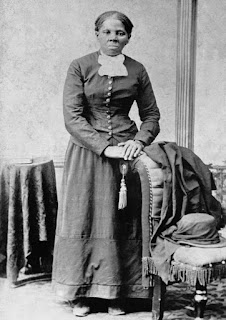 Conductor on the Underground Railroad first learned to navigate and survive. It was also likely the place where she came to the crushing realization that freedom in America was not extended to people who looked like her.

The juxtaposition of these two stories resonated with me, but it took a parishioner of mine, a black woman from whom I’ve learned much over the years, to highlight the real significance of this connection between these two events. She related the varied emotions we were feeling in the aftermath of the Chavin verdict, back to Harriet Tubman’s experience on the Underground Railroad. For as much joy as there may have been in leading someone from slavery to freedom, in successfully navigating that hard road from bondage to liberty, it was tempered by the fact that there were always others who remained in chains. There were always more slaves to lead into freedom; there was always more work to be done.

And even as one police officer was held accountable in the killing of one unarmed black man, there is always more work to be done in the fight for racial equality. The tragic reality is that true equality for people of color in this country remains elusive. Blood continues to be spilled and the deep wailing of grief continues to pierce our hearts. We proclaim “liberty and justice for all,” even as all are not experiencing liberty and justice. And that is a failure. A failure of humanity, a failure of lofty rhetoric, a failure of faith.

Because, and I’m speaking to my fellow white people here, we cannot remain silent while our black and brown siblings are crying out for justice. We cannot stand idly by or walk on by while our fellow children of God are living in fear and crying out in pain and wailing in grief. At least not if we seek to embody what it means to love our neighbors as our selves.

What I hope people recognize is that racism is not something that exclusively affects people of color. It is destructive first and foremost to our black and brown siblings, yes. It rips away dignity through discrimination, it bruises emotionally and physically, it tears down economically and socially. But the sin of racism — for that’s what it is — also eats away at white people. From a faith perspective, it prevents us from living into the fullness of God’s kingdom here on earth. Racism distances us from God and inhibits us from being the people of love, grace, and compassion that God has called us to be. From a human perspective, racism clogs our hearts with hate and destroys us from the inside out.

This week has reminded all of us that, as with Harriet Tubman — the woman known as the Moses of her People — there is always more work to be done. We owe it to our friends of color, as well as to ourselves, to roll up our sleeves and continue on. Until no human child of God is treated as less than exactly that, the work of anti-racism must continue.