Elite for the Day 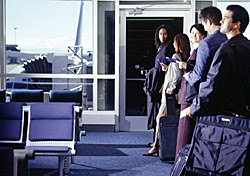 Are you Silver Elite, Gold Elite, Platinum Elite or riff raff? These are the questions that can't help but run through your head these days when waiting to board an airplane. My curate, Anne Emry, and I flew out to Minneapolis for the Festival of Homiletics yesterday and as a parade of pre-boarders strode past us to the gate it left us wondering. In a need to make nearly every traveler (except us evidently) feel special, the lady behind the counter making announcements into the ubiquitous handheld microphone must have reeled off ten different categories of "specialness."

I'm used to people pre-boarding. Fine, let the first class folks board first -- they paid for it and they all look like they need a drink. And having been one of those parents traveling with small children, I understand that special ring of hell -- let them get on with their car seats, diapers, screaming children, etc. They, of course, also look like they need a drink. But then there's that middle group that I don't understand -- in addition to the "Olympic" travelers awarded gold, silver, and bronze (or whatever it is) there are a host of others with "preferred" status. There's the Chairman's Club (though you might have to be a Chinese communist to qualify), and the President's Preferred members, and Advantage Gold, to name a few.

As that original Biblical stage mother -- the unnamed mother of James and John -- clearly knew, rank matters. At least to humans. When she pulled Jesus aside to try and persuade him to let her sons sit at his left and his right in the Kingdom of Heaven, she was basically trying to get them Platinum Elite status. And Jesus would have none of it.

Despite what titles the airlines convey we're all in this together. The whole notion of frequent flyer royalty is just another way to mask our deep insecurities. By pumping up our egos with absurd-sounding memberships we're feeding into what we crave: being assured that we're better than others.

My favorite title bestowed upon airline passengers? The vaulted "Elite for the Day." I'm not sure how you earn that or what the airline screwed up to give out such a title, but even fleeting eliteness was enough to let you board before the clergy from Hingham. As I said to Anne, "I don't need to be elite for the entire day -- how about just the next ten minutes?" But then again we -- and our luggage -- all made it to the same destination on time and in one piece.
Posted by Tim Schenck at 12:40 PM

I couldn't get past "the Festival of Homiletics". Really?

I'm such a zero when boarding a plane. I can never understand what they're saying and almost never catch when they call my row to board. Yet it never seems to matter. We all herd on like cattle anyway. Somebody's always coming on late or out of turn or... I think the minute you personally are all set to board you should. Everyone just stand in line and be done with it. Anyway...no one ever asks me. ha!