The 12 Days of Christmas -- Snark Edition 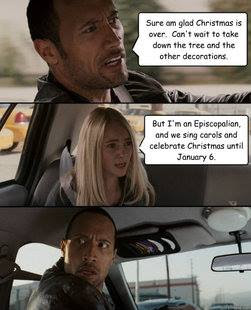 My least favorite Christmas carol by far is the "Twelve Days of Christmas." It's not that I wouldn't want to give my "true love" a whole bunch of poultry, its that it's the Yuletide equivalent of "99 Bottles of Beer on the Wall."

A couple of years ago I wrote a blog post titled The 12 Days of Christmas (The "Real" True Meaning). It was rather church humor-y in nature as I imagined the meaning behind the twelve gifts (ie. Six Geese a-Laying — six seminarians laying homiletical eggs in the pulpit).

Twelve drummers drumming until your ears start to bleed and please get rid of that Little Drummer Boy while you're at it.

Ten Lords-a-Leaping which is heretical since there’s only one Lord.

Nine Ladies liturgically dancing in outfits made of pink chiffon so you’ll want to avert your eyes.

Eight Maids-a-Milking but don’t drink the milk because it’s neither pasteurized nor homogenized so there are chunks floating in it.

Seven Swans-a-Swimming in your basement because you forgot to turn the water off and the pipes froze.

Six Geese-a-laying goose poop all over your back yard.

Five Gold Rings or actually just one because you pawned the other four.

Four Calling Birds which are really annoying when they wake you up way too early on New Year’s Day after a late night out.

Two bars of Dove soap shaped like turtles that you can’t wait to regift.

And a Partridge in a Pear Tree which looks more like a pigeon than anything else.

My favorite -geese in numbers. They leave A LOT of poop everywhere. It would be awful to clean up-the ultimate punishment.

All six geese and their extended family are here in Duxbury down at the cove right now, waiting for those of you hunting for such unliturgical gifts. Feel free to stop by to pick them up.

Otherwise, they have my permission to stay around as long as they are geese a-swimming-in-the-bay (with or without swans), where they are much more beautiful and less messy.