The Bubble Bursts in Baltimore 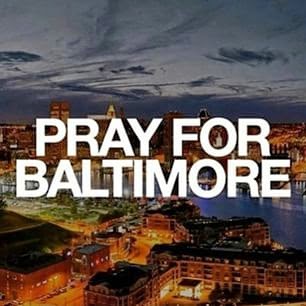 There was an adage growing up in white Baltimore that declared, "70% of Baltimore is black; the rest of us all know each other." I recall being vaguely uncomfortable whenever I heard it -- the product of liberal parents -- but also thinking, well, there is some truth to that.

And therein lies the problem. Despite all the rhetoric, Baltimore, like many urban areas, has remained a segregated city -- geographically, socio-economically, religiously, politically. The forces of income inequality and institutional racism, combined with the tragic and preventable death of Freddie Gray, have sparked the inevitable outburst of despair triumphing over hope.

And we're all responsible. Every time we fail to acknowledge our privilege comes at another's expense; every time we neglect to reach out and embrace the less fortunate; every time we close our hearts to those who don't look or act like us.

Whenever children grow up in privileged communities, you hear parents lament that their kids are "growing up in a bubble." Living in a wealthy community on Boston's South Shore, I've had the same thought. Sometimes when parents say this, it's because their "ungrateful" children don't know how good they really have it. There's also a sense of guilt that they aren't exposing them to the "real world" and helping them develop a healthy empathy for others. Of course, given the choice, parents wouldn't actually leave that bubble. It's not perfect, of course, but it's not as if they're going to uproot their families to leave the bubble that is their perceived birthright.

In Baltimore this week, that bubble burst. And it burst publicly and violently. Stores were looted in my mother's downtown neighborhood; protesters walked the streets; the National Guard was called in; the race riots of 1968 were invoked.

We have several choices here. We can ignore the problem and stay entirely within the bubble -- the odds are that it won't burst where we live. We can engage in suburban "slacktivism" by self righteously posting quotes from Martin Luther King, Jr. on Facebook from the safety of the high speed internet connection in our living rooms. Or we can work to proactively burst the bubble by confronting our fears and reaching out to others.

I heard a story this week of a courageous woman named Maggy Brankitse. She is the survivor of the brutal civil war in Burundi where, in 1993, she watched as 72 fellow villagers including her best friend were slaughtered before her eyes. She took her seven adopted children and 25 others and fled to safety, determined to care for them.

With an iron will and a passionate faith, she succeeded in creating an organization called Maison Shalom (House of Peace). Over the past two decades it has grown to include homes, schools, a hospital. In a word, she has built and maintained a thriving community. But one detail of her work and ministry stood out for me. She insisted on building a swimming pool on a former killing field to represent the waters of baptism -- a symbol of new life and hope.

My prayer for Baltimore, and all of us, as the bubble bursts, is that a symbol of our interconnectedness and common life will also emerge out of the pain of the killing field. Because violence -- physical or emotional -- is never the answer and love does indeed conquer all.
Posted by Tim Schenck at 9:00 PM

"Because violence -- physical or emotional -- is never the answer and love does indeed conquer all."
Well said.
Tuesday night was quiet in Bolton Hill.
We are strong. We are people of goodwill. We are frustrated , and a few have lost hope. When we restore hope, we see one another's humanity more clearly.

Brilliant and true, my good friend...